Last night we played Supernova which is a 4x space game.  It involved combat with other players, exploring and expanding through space, gathering resources and researching new abilities.  You can also upgrade your empire to give you better combat options and faster ships.

I really wanted to like this and going in I knew it was going to be a long ish game.  I liked all the mechanics, it was fun putting tiles down, the combat was good (a bit of bluffing and tactics involved) and I liked how you have to catch the moons as they move round.

The research was good, I liked finding the special abilities.

For me the only problem was the length and this is probably a problem with me rather than the game, turns took quite a long time to come around because on your go you don't just do one action there's a list and sub list of actions you have to complete and if you are battling as well then if you're not involved there's not much to do.

There were some production issues, with the box insert and rules weren't great.  Also the iconography wasn't super clear however the art was nice, with futuristic looking cards and nice clear colours for the player tiles.

I can't compare it to any other space 4x games because I haven't played any, it would be interesting to hear what the others players thoughts were? How does it compare to Eclipse, Xia etc?

I think that's a fair assessment Rick. I thought it was okay, the main issue for me was the length of play. Also, considering the length of play, I felt the game didn't have enough complexity and variety for my liking (there's a lot more variety and richness to play with something like Eclipse or Ti3; which makes you feel happier with a longer play session). For my money, it's a Space 4x lite; or a Space 3.5x (it wasn't so big on the exploration 'x').

What player counts does it do? May be interesting with 2, where you'd get twice as many goes in the same time, as you would with 4 players.

I wanted to like it too, but for the length of the game it was it just wasn't that interesting. You didn't have different paths of cool abilities you could buy, just powering up your basic stats, or keeping the resources for points. It never felt like you were progressing in any meaningful way. Eclipse and Xia just give you so many more options and you feel like you're really doing something. Building ships and attacking people with them is just way more fun than laying down a few tiles.

Turn order was far more important than we realised. The game is mostly about holding planets and moons at the three scoring turns. If Jamie had chosen me to go first in the last round then the whole round would have been completely different and radically changed the final scores. I think Rick would have won when as it was he came last. It just feels really unsatisfying that it made that much of a difference.

I also liked the moons orbiting around the planets, but it didn't make any sense thematically. You benefit from the moon by waiting in dead space for it to come round and hit you rather than building something on the moon. Makes no sense. Controlling the solar flare was also fun, but made no thematic sense.

I'm not actually a fan of the secret card battling system, but I don't really like bluffing so that's just me really. I'd rather roll some dice.

It's main problem was that none of it really felt fun? There was a lot of downtime and it felt like it was dragging. That wasn't anyone's fault, we all took our time at different points, it just all seemed to take ages for no particular reason. The crappy rule book didn't help with that, it would definitely be quicker a second time.

Anyway, I think if you want a big space game then any of Eclipse, Xia, Firefly or even Exodus are more interesting and fun in different ways. If you want an area control, smash in and take territory for points with fun power ups then play Kemet or Cyclades.

I think it could be worth another shot. It was so hard to get the basic rules down that we never really got to the complexity or strategy of it I think. However you're all right that it was just kidding something.
Worse than the sum of its parts

Maybe, it wasn't a bad game, just underwhelming. Some house rules might speed it up a bit?

Lizzy wrote:Maybe, it wasn't a bad game, just underwhelming. Some house rules might speed it up a bit?

Sounds an ideal candidate for the competitions where they give you a game and give you an hour to come up with a way to fix it. 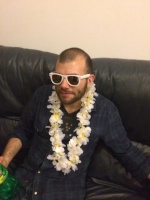 Kemet next Tuesday? Not played it for ages

Similar topics
» This game sure can be adamant about wanting players to take certain weapons
» Luck O' the Bearish Instant Win Game
» The wish game
» Outcry. The shimmering game
» What Would You Like In A New Tex Murphy Game?