So. This whole co-op moving about dice rolling thing is not my favourite type of game. I would almost always choose something else. In fact the only reason I would ever choose this type of game is because I can't really be arsed to focus on anything and if I'm in the mood to have a beer and mentally drop in and out of the game, it works. I can be quite vocal and make suggestions or I can be passive and not be too involved. There's rarely much brain-burning.

In that respect, I prefer MoM to TIME stories. That does have some thinky stuff and some more effort required so you need to be 'in' that game more.  (What would you prefer?) TIME stories can also be repetitive.

Im not a huge fan of the theme, but it's not bad. For me I probably slightly prefer the Imperial Assault theme. Opinions will differ. This also doesn't have the campaign of IA which is a pity. Perhaps in the future. But the app makes the game a lot richer, more interesting and more thematically immersive. It's right there visually and audibly  rather than you basically having to imagine it. And the 'bad guy' phase is more interesting in some ways - and you're all on the same team again the app (which would you prefer?). It does mean the app takes over some of the player interaction and banter you might have with IA.

For me, MoM is more interesting than the other two here, more enjoyable to play and sometimes has a bit more possibility of not being screwed by the dice (yes, you really do want to pick those player powers).

It's less repetitive than a traditional co-op like Pandemic due to the stories. But Legacy sorts that out for the trad games. I would slightly prefer to play Pandemic legacy - to see where the story goes next. It has that hook. Pandemic allows even more dropping in and out though and that means it can easily be played by one player over-riding the others. MoM seems to allow more independent decision making - because there is more choice - due to the very large exploration element. Which is great.

Is this the way of the future? Well there's clearly loads more that can be done with this format. This game itself could be developed a lot more with more scenarios for the existing components, campaign mode, app add-ons etc. The potential here is huge - though your wallet might have to be as well. Theres a path to board game elitism here, where only the well financed can tread.

I enjoyed the short game. The long game was Really.  Bloody. Long. If this is actually a genre you're keen on, you're going to fucking love this all the way into your overdraft.  If you like any of the above games, or want to see awesome app integration, should you try it? Yes. Would I rather play a deck-builder? Yes. 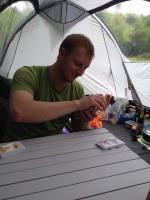