Roll With It - Board Game Day final info

Kes wrote:Just wanted to say good job Rob. You obviously put a lot of work in to make it a success and hopefully it's paid off as well as you were hoping. I'm really pleased the so many of us from the club are happy and able to help with the running.
Good job everyone, especially Rob
P.s. Sorry for winning very cheap games -_-

Absolutely agree! I wasn't able to make it last year but was very glad I could this year. Great atmosphere and really well organised. Sounds like it raised a great amount of money too.

First time for me too, really enjoyed it. I'm definitely up for doing it again next year

Any news on this left game?

My Kodama doesn't appear to have made it home with me 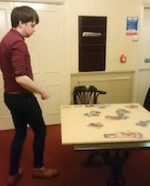 It seemed very well organized and received, with a nice, relaxed, family-friendly atmosphere.  I ran four games of Mysterium and one Sushi Go Party (which John H won, surprise surprise).  Mysterium especially seemed to go down very well*.  After finishing one playthrough of Mysterium, one of the gentlemen who had played walked straight over to the Patriot table and asked to buy a copy, though I don't think they had one with them.

A lot of different games were played, which was cool.  I saw a lot of smiles and a lot of helpful SBGC people teaching or running games, or just checking in with groups to make sure they were getting on okay with whatever they happened to be playing.  All in all, it seemed, to me, a grand success.  I'd be curious to know how much was raised in the end; hopefully a lot.

Congratulations to Rob for making it all come together so well even after the late-stage venue change.


*Though I didn't get a chance to ask Jen her opinions.

My Kodama doesn't appear to have made it home with me

Ah, yeah, I seem to remember, Rob had a copy of Kodama that was left behind. I'm sure it was Kodama, was in a small-ish box IIRC.

Similar topics
» Roll With It - Board Game Day
» Playing Board Games Online (Board Game Arena, Boiteajeux etc.)
» A list of board game resources - local shops, game groups, online reference, etc.
» My perfect board game, based on a video game...
» Game (the shop) Board Game Sale on now

» Game (the shop) Board Game Sale on now