Ho, ho, ho. Gather round boardgamers, young and old, and let me tell you a little of events in the north pole.

It’s not all work here, even in winter. After the factory whistle blows at the end of the day we too like to huddle around fire-warmed tables in homes and alehouses so we can play the latest board and card games.

There is one game in particular my elves — or, should I say, my minions — just cannot keep away from this season. A league of them will riot to play this legendary game, and have such fun they mech short work of it each time.


It's important you play this on repeat whilst reading to gain maximum insight from this review.

Some of you may be feeling lost. Let me plant your chilly feet in familiar snow with this helpful comparison: My Little Pony Collectible Card Game is a lot like Android:Netrunner, except the hackers are ponies, and the corporations are ponies. Instead of scoring agendas, you are solving problems, problems like “Accessorize the Crystal Ponies”, “Official Bunny Census”, and “Figuring Out Friendship”.

Each player starts with only a main character -- wait, excuse me, that should be a mane character. Unfortunately, that is as far as they went with obtuse thematic terminology, so the players are left to elaborate. We like to call each player's deck their stable, or their ranch; the player’s hand is the trough; and the discard pile is the glue factory.

Soon, players will choose problem cards from a separate deck, not unlike how plot cards are chosen in the Game of Thrones: The Card Game. This is, of course, only one of the many similarities between the Game of Thrones franchise and My Little Pony. 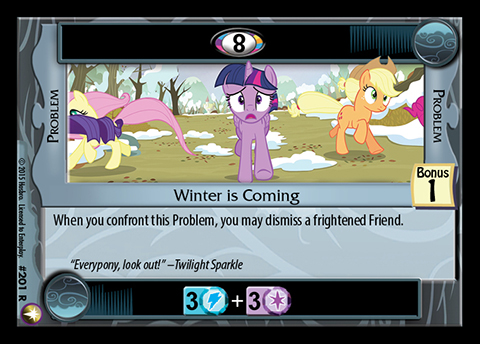 I first saw the logo on the box before we wrapped a new copy of this game for delivery, and I was shocked to discover that My Little Pony Collectible Card Game game is in fact not a Fantasy Flight production, but was actually produced by a little known company called Enterplay. It was co-designed by the same chap as Mortal Kombat X: The Miniatures Game. That’s what I like to call mince pierony. Ho ho ho.

Speaking of which, my list says that copy of the game is to be delivered to a 42 year old biker called Beef. Well I’m not here to judge.

I mean, obviously I am here to judge -- that’s what the naughty and nice list is all about. But I don’t judge that. Only important things, like whether you have a beard, or how long it takes for you to take your turn in T’zolkin.

Thing is, if it weren’t for Beef and his brony friends, there is no way this surprisingly clever game would ever have been made. There just can’t be much demographic crossover between the traditional My Little Pony audience and the hard core CCG players who are willing to suffer through a horribly formatted, 26 page long rule book that looks a bit like a legal document. “Refer to section 7, subsection 801.1, relating to Simultaneity”. That’s a real example.

There’s no doubt that this game is clever, though. Don’t pout, I’ll tell you why. It was made by designers who clearly have an intimate understanding of other CCGs. They know what works in Magic: The Gathering, in Legend of The Five Rings, and they knew how to work it into a new game. Then they just had to make some playful changes so that the ponies weren’t charging into vicious battle with one another, but instead were solving problems around their home of Equestria.

You’ll find that the colour values on cards act a little like land in Magic in that they provide the power for other cards, but here there is no separation: cards that provide effects also provide colour power, which streamlines the game whilst also creating more tactical decisions each turn.

Moreover, when it comes to building decks you have rather a lot of options -- you can go for an aggressive stampede of friends, put the reigns on you opponent with a deck that controls and slows them, or bet on specific combination for a big win -- but there seems to be a conscious effort by the designers to avoid deck types that are not fun to play against. There is only a weak style of control game in My Little Pony, because there are very few effects that outright stop the other player from acting, which means a game almost never feels cheap or frustrating. Both players can enjoy a satisfying dressage of cards every time they play.

Not convinced? Just consider that there are still expansions being released for the game 3 years after it's release. The average collectible card games comes and goes like a flash of fire on a Christmas pudding, yet My Little Pony Collectible Card Game endures. There’s even a My Little Pony Collectible Card Game championship at GenCon each year, for goodness sake. I think that shows as much as anything that this game has sturdy hoofs.

If you're the sort of doubtful scrooge whose eyes got sore from rolling them so hard whilst reading this, you might be exactly the sort of person who needs a little My Little Pony in their life. Take this Christmas advice: find somebody close to you. Your father. Your lover. Your boss. Whip out a surprise pair of My Little Pony Collectible Card Game decks at an opportune moment and just see the look on their precious faces.

I agree with Santa. I played this with my niece and now it is my new favourite card game. I was shocked by the amount of hidden strategy.

Yeah, I was considering that but the ones I have seem to be a different size (bit narrower) than standard cards. I'm presuming the MLP game has that different card size...

Ok I'm going to say it - what is going on right here?

This on top of Om nom nom being on your wishlist - I almost believe you... I still don't get the joke? I'll stick to Pokémon...

It's okay to feel confused, Aneurin.

Cheers, Paul, but she's already sleeved her cards with these.

I think I've played it! Is it the game where you get two teams of little ponies; good ponies and evil ponies, and they all go on missions, but the good ponies don't know who the evil ponies are?

Similar topics
» The game nobody wanted to play...
» Next Club Purchase
» Seasons - How To Play
» My perfect board game, based on a video game...
» Zombicide Game Night - Get a free Survivor for your game...