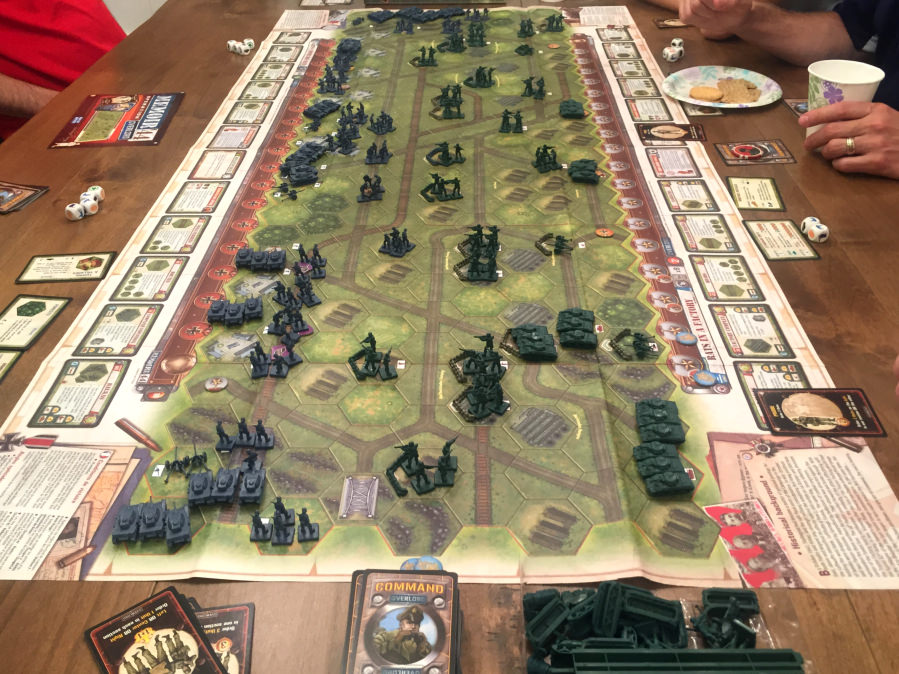 Memoir '44 is a really simple wargame for 2 players. Operation Overlord, which I opened as my Secret Santa present, lets you play it with up to 8 players, where one player hands out tactics cards to the others but can only communicate with one player per turn. Everyone else has to figure out how they can best support the team without having it explained by the general.

Here are Paul and Quinns playing it:

This sounds amazing, and all I need to play one of the larger Memoir 44 maps from the Battle Map series... which are all out of print. Damn!

a) Anyone have a battle map, or alternatively just a second set of the game (I believe you can just shove two of the boards together for the same results).

and b) Who's playing?

I'd love to give this a go. I know that Stephen W was interested in trying it too, and has maps & armies...

I'll play, and I have a second copy of the base game.

I'd be up for a game sometime for sure!

Cool, looks like player numbers won't be a problem

. Stephen and, uh, the chap sitting on my left during Emergence last night — my bad, the name hasn't stuck yet, but I'll get it soon — also both want to play, and Stephen does indeed have the stuff. He thinks we can get it done on a Tuesday, so we'll try and arrange it on a Tuesday sometime in January.

Yeah Sam, yeah I have a second set and some extra boxes of figures. Me and Jacob are up for it could we try for Jan 10th?? Might be worth a go

Still good for Jan 10th, Stephen? Works for me. Everyone else? Sign up now and I'll add the list to the meetup thread when the time comes.

Heck yes, put me and Jacob down for the 10th too, I will bring my stuff as well

Me please. If there's room?

Dammit... Looks like Jamie nabbed my spot. Next time Gadget, next time...