When it comes to this sort of "character-driven" tactics games (by which I mean games in which you control a smaller number of unique characters as opposed to larger numbers generic troops, as in wargames), Krosmaster is so much better than anything else I've played. The 3D world just looks so damn nice on the table, for one. Sentinel Tactics, for comparison, was supposed to be representing the verticality of a modern city, but did so with these horrible terrain-hight pips that were not easy interpret at a glance and thanks to the rubbish graphic design the setting still looked flat and gray and empty — most the spaces on this huge board had nothing on them! 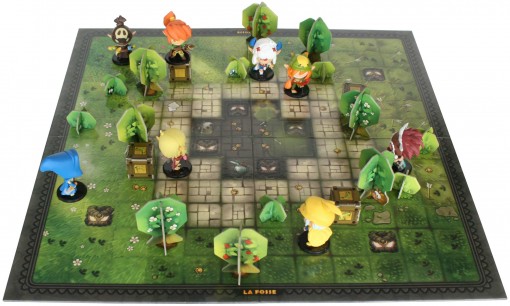 Krosmaster's map is smaller and the trees, crates, shop and coins places in this small arena mean every move is an interesting decision. The coins buy items from the shop that can be used immediately, offering more interesting combinations of actions, and every character has a number of abilities that are smartly balanced by the number of action points it costs to use them — abilities with effects that are both varied an easy to understand and thematically appropriate for the imaginative cast of characters that use them (rather than hard to understand abilities used by a cast of scowling X-Men rejects).

I find this a fun comparison because it really shows the bredth of quality in board games, the difference between a game that has been nurtured by a talented group of artists and designers and and a Kickstater mistake that only its parents could love.

It was a fun, and really visually appealing game Sam. I'd love to play it again sometime. I normally hate coop games; but having 2 teams of 2, I thought worked really well ... you're coop'ing with you're team mate, discussing tactics etc. The little (hmm, or not-so-little) miniatures looked super cute, and their build quality was very good (as it was with the rest of the game).

I feel, one simple thing that would make this game super awesome, would be modular floor tiles, to create different scenarios. Also, 3 teams of 2 could be interesting...